Wellington, the offspring of a railroad company and an irrigation company 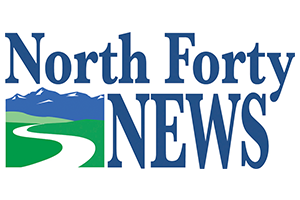 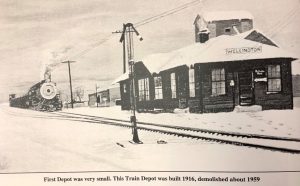 Wellington, the offspring of a railroad company and an irrigation company

Wellington was named after Charles L. Wellington, who was the traffic manager for the Colorado & Southern Railway in 1902, when plans began for bringing the railway north of Fort Collins. The area that would become Wellington, previously known as ‘Section 33 in Township 9 North-Range 68 West’, was used for farming and livestock, thanks to the water supply brought to the area by North Poudre Irrigation Company, the owner of the land as of 1901. At the time, the only way to get crops to market was via horse-drawn vehicles and unpaved roads. Beet farming was the biggest of these crops, and the completion of the railroad in October of 1903, allowed the first train to carry sugar beets from Boxelder Valley farms to the Fort Collins sugar factory. With the convenience the railway added, and the increase in agricultural land, a real estate boom sparked, and led to the founding of a town that would serve as a local market center. The plat for the town of Wellington was filed with Larimer County in January of 1903, with the railway and depot bordering the West end of town. It was a rectangular grid of twelve blocks, with Cleveland Avenue as the main route in and out of town. The other east to west streets were given presidential names Garfield, Harrison, McKinley, and Roosevelt Avenue, while First, Second, and Third Streets ran north to south making up the boundaries for the original town site. The rest of Section 33 in this area known as Boxelder Valley, was called ‘Wellington Place’, and was divided in to 10-acre parcels. North Poudre Irrigation placed an ad in the Fort Collins Courier in January of 1903, advertising the new town of Wellington and the beautiful suburb of Wellington Place, covering 40 acres in the heart of the fertile Boxelder Valley.  All the land in Wellington Place was sold by 1905, and in this same year the town of Wellington expanded to the east towards Fourth and Fifth Street, for a downtown closer to what we know now.

What started as a twinkle in the eye of a railroad traffic manager and an irrigation company, grew in to the 116-year-old downtown we know today. Beginning in 1903, businesses and homes popped up all around town. Among the first businesses, even before the completion of the railway, was the Duncan & Hackleman Blacksmith Shop and the Corbin-Black Lumber Company, buildings still standing today on First Street. Next to follow was a general store, a post office, a schoolhouse, and the Colorado Telephone Company. Gravel was hauled from Boxelder Creek to grade the streets, and 400 shade trees were planted around town, for the first downtown beautification project. The 16 room Wellington Hotel opened for business in August of 1904, accommodating overnight guests and space in the dining room for special occasions. The first Mayor was elected in 1905, and the first town hall was built in 1909. The first water system was installed in 1907, with a filtration system made of gravel and charcoal. Electricity came to Wellington in 1916, which is also when downtown got its first street lamps, and it wasn’t until 1925 that plumbing came to town. The First National Bank of Wellington was open for business in September of 1905 (in the building now owned by North Poudre Irrigation), and John Cusack, the owner of said bank built a beautiful Victorian home on the east side of town, that we now refer to as Drohmans Salon Day Spa. In 1905 the buildings that now house Soul Squared Brewing and Owl Canyon Coffee were built as a restaurant and retail shop. The Hager Harness shop built in 1909 is now the Polished Nail Spa, though you can still see the ghost sign for the Harness shop on the north side of the building. Wellington’s history is laced throughout downtown, in the many brick buildings and old houses that line Cleveland Avenue and First Street, and the information above only captures pieces of the first decade of Wellington’s history.

In 2016, the Wellington Main Streets Program, in conjunction with the Wellington Area Chamber of Commerce, applied for grant funding from the History Colorado State Historical Fund grant, to fund a historical survey of 25 downtown Wellington buildings, hiring Ron Sladek with Tatanka Historical Associates to provide the service. This project was completed in 2018, and the survey results can be found on the Wellington Main Streets website at www.wellingtonmainstreet.org/resources or at the Wellington Public Library. The above information was obtained from the Downtown Survey Cultural Resources Documentation & Analysis report written by Mr. Sladek. Stay tuned for more stories regarding the history of Wellington.