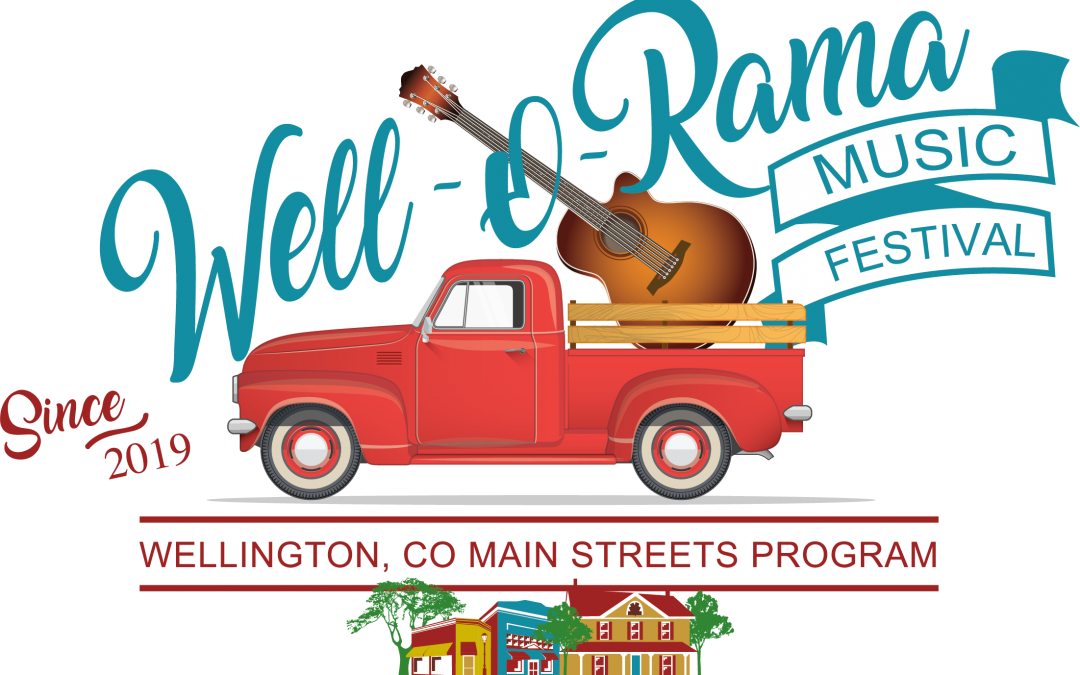 What used to be the Wellington Co Main Streets Program Summer Concert series, has now become a one-day music festival called ‘Well-O-Rama.’ The name came from an event that was a part of Wellington’s history, originating in 1968 as a celebration of the paving of Highway 1 through downtown Wellington, and occurred annually until the early 1980s. This year’s music festival had five bands, playing from 11:00 am – 6:00 pm in Centennial Park, in downtown Wellington. Wellington’s own Old Colorado Brewing Company, Soul Squared Brewing, Sparge Brewing, and Cantina Liquors kept the libations flowing for this event. An Americana mixture of country, bluegrass, and honky-tonk kept the toes-a-tappin’ during the sets, and between sets, games guaranteed some laughter and good times.

Jackie& the Racket is described as being ‘Colorado’s premier Rocky Mountain Honky Tonk’ band. This Americana band from Boulder consists of Jacquita Straw on guitar and banjo, Francisco Prado on lead guitar and Vox, Kelly Turner on Drums, Adrian Engfer on bass, and Cody Russel on pedal steel.

Sugar Britches is one of the most popular Americana country acts in northern Colorado right now. This band, from Fort Collins, consists of Brian Johanson and Josh Long, a duo bringing honky-tonk, electric guitar, and clever lyrics to Centennial Park.

The Devil’s Share is a Fort Collins bluegrass band, comprising members Douglas Crowl on guitar and vocals, Hannah Barnes on violin and vocals, Paul Geoghan-McWilliams on Bass, Rich Boot on drums, and Michael Fritz on Banjo.

Goatz! is a northern Colorado country-folk band, led by Chris K, one of Colorado’s most widely heard radio personalities, producer and the host of Chris K’s Colorado Playlist, and on-air host at 105.5 The Colorado Sound. Chris K is joined on stage by Chris Jackowski on guitar and Vox, Jackson Earles on fiddle and mandolin, Chris Kennison on pedal steel, Janeen Bogue on bass and vocals, and Oscar DeZoto on drums. Goatz! was formed in 2003, but Chris K has been playing since the 70’s.

Leslie Tom, a traditional country singer-songwriter out of Denver, is the headliner for this year’s festival. Leslie won the 2018 Academy of Western Artists Pure Country Female Artist of the Year award. She is Texas-born, and her musical journey began at age 7, blossomed in Texas, spent a little time in Nashville, and eventually led her to a move to Colorado in 2014. She is joined by band members John Macy, Lindsey Brown on bass, Todd Moore on drums, and Matt Weesner on wurlitzer. She has 3 albums out, High Maintenance (2006), The Second Act (2013), and Leslie Tom (2017).

Events like these wouldn’t happen without the support of sponsors. This year’s top sponsor was Meridian Trust Federal Credit Union, who will open doors to their new Wellington branch in December 2019. Our next biggest sponsor was the Bohemian Foundation, helping to bring quality music to this free community event. Wellington Veterinary Hospital, Banner Health, Poudre Valley REA, Town of Wellington, and Tabby Road Animal Hospital provided significant contributions through their sponsorships. Many more local organizations pitched in to help provide vendor booths, food trucks, and games for the whole family. It takes a community to put on an event like this, and we were so excited to share a piece of what Wellington has to offer!

This free, family-friendly event was put on by the Wellington CO Main Streets Program, a 501(c)3 nonprofit organization, that serves to promote, enhance, and develop downtown Wellington for the benefit of its inhabitants, businesses, and visitors. For more information on the event, check out www.wellingtonmainstreet.org/well-o-rama.