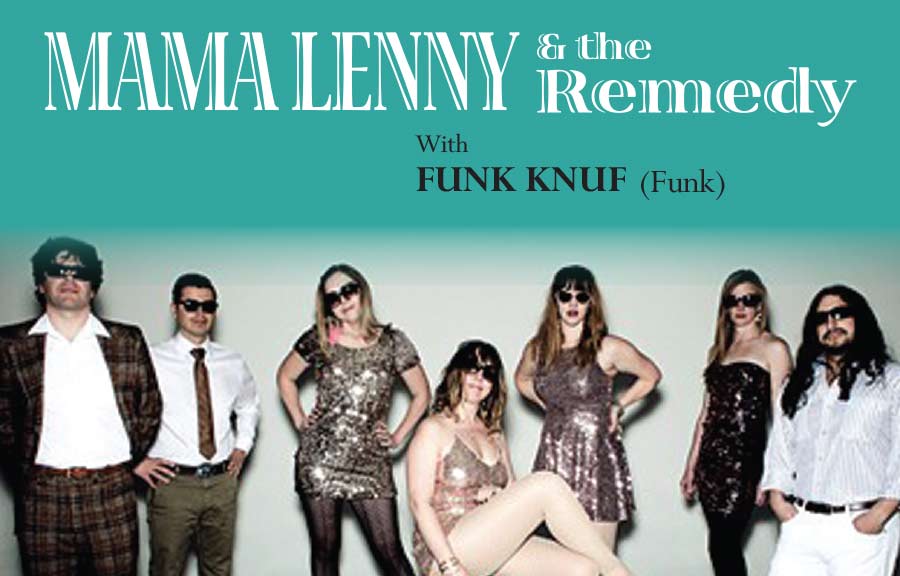 The crowd will be dancing at the final concert in this year’s Wellington Summer Concert Series!  Energy filled jazz, soul, funk, and disco will flow from Centennial Park in downtown Wellington. The concert series is hosted by the Wellington Colorado Main Streets Program, a nonprofit organization dedicated to the promotion and development of downtown Wellington. Enjoy a taste of what Wellington has to offer in the beer garden, sponsored by local breweries Old Colorado Brewing Company and Soul Squared Brewing Company, and liquor store Cantina Liquors. Tabby Road Animal Hospital is the title sponsor for the series. August’s presenting sponsor is First National Bank, and they will be giving away lawn chairs to bank members again this year. The food sponsor for the VIP area is Wellington Grill, with decorations provided by Thistle. Several food trucks will line the park, including The Cakery, so save room for dessert.

August’s headliner is Mama Lenny & the Remedy, a Fort Collins band described as a “high-energy, bold fusion of soul, funk, rock, blues, and disco with shrewd hints of jazz, gospel, and Broadway.” This seven member band, was started in 2011 after band members Ben Prytherch (Bass) and Ken Monks (Guitar) noticed Laniece Schleicher’s amazing vocal abilities as she accompanied a friend’s band on stage at a Colorado venue. Laniece, aka Mama Lenny, has always loved to sing, starting out at an open mic in Lincoln Nebraska where she was noticed and asked to sing with many great local musicians, and moving on to record more than a dozen albums from a variety of genres. Other talented musicians, Kelly Keeler (backing vocals), Annie Sklar (Tenor Saxophone), Greta Cornett (Trumpet), and Crip Erickson (Drums) later joined Mama Lenny and the Remedy. The band has played at a variety of Northern Colorado and Wyoming venues, and is the recipients of the Fort Collins Musicians Association’s Best New Band 2012, and Best R&B, Soul, Funk for 2012-2016, and was one of the 2016 Top Ten Female Vocalist in Colorado to listen to from the Colorado Sound.

The opening band is Funk Knuf, a funk band from Boulder CO. This eight person band is led by Jill Watkins on vocals, Geno Treppeda on drums, and a talented horn section consisting of John Battista (tenor sax), Dave McLoughlin (trumpet, flugelhorn, and trombone), and Doug Carmichael (alto, bari sax, and flute). Curtis D. Agostino (guitar), Bill Capsalis (bass), and Steve Clymer (keyboard) complete this all-star group of talented musicians for a funky and energetic sound guaranteed to have you moving your feet.

This free family friendly event will include face painting, food trucks, and vendors. Gates open at 5:30p, the opening band goes on at 6:00pm, and the headliner at 7:30pm. Show up early to take advantage of happy hour drink prices from 5:30p-6:30p. Make sure to pick up a 2018 Summer concert series shirt at the merchandise booth. VIP tickets and vendor sign up is available through the website www.wellingtonconcertseries.com.