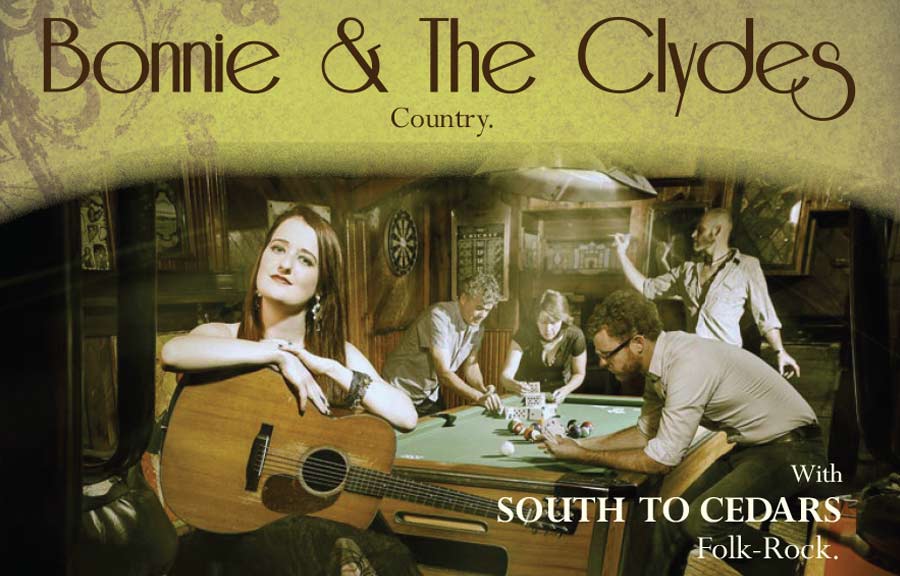 The Wellington Summer Concert Series is back again with this year’s Women of Summer theme. Three concerts held on the third Saturday of the months of June, July, and August, all featuring women led bands. The concerts are hosted by the Wellington Colorado Main Streets Program, and are held in Centennial Park, in historic downtown Wellington, from 5:30pm-9:00pm. This year’s beer garden has been expanded to cover the entire park, and is sponsored by local breweries Old Colorado Brewing Company and Soul Squared, and liquor store Cantina Liquors. Tabby Road Animal Hospital is the title sponsor for the series. We have added a VIP area this year, which will include food provided by local restaurants. July’s presenting sponsor is Points West Community Bank.

July’s headliner is Bonnie & the Clydes, a Rocky Mountain country soul band out of Longmont, CO. Bonnie Sims has been singing and playing instruments since childhood, growing up onstage with her father, who is a career musician. She attended South Plains College in Texas, earning a double major in Mandolin and Vocals, and was awarded Best Female Vocalist in 2006 and 2007 and Best Female Instrumentalist in 2007. Bonnie and her husband Tyler Sims, whom she met at South Plains College, started the band Bonnie & the Clydes, after moving to Colorado in 2010. They are joined by Todd Moore, Glenn Taylor, and Caleb Roberts, all talented and experienced musicians. The band has released four albums and received multiple awards for their original music, including the 2013 and 2014 Best Country Band in Denver Westword’s Annual award.

July’s opening band is South to Cedars, a four-piece Americana band out of Fort Collins, that plays a mix of folk, bluegrass, country, and rock. Lead singer Shawna Stratton has been singing since childhood and performing on stage since she was 16. “For me, music is communal and transformational. As a singer, my greatest wish is to leave you better than I found you…deeply satisfied, and hopefully wanting just a little more.” says Shawna. She is joined on stage by Ben Haugestuen, who wrote the songs for their 2016 debut album Sunny State, and also Greg Fischer and Jim Eads.

This free family friendly event will include face painting, food trucks, and vendors. Gates open at 5:30p with a happy hour that runs until 6:30p, the opening act goes on at 6:00pm and the headliner at 7:30pm. VIP tickets and vendor sign up is available through the website www.wellingtonconcertseries.com.